Showing posts with the label fitness band
Show all

By Strovek - July 07, 2020
The following are the steps for shutting down Fitbit Charge 3.

Fitbit Charge 3 vs Honor Band 5i

Total sleep hours visible on the band.NapsYesYesNotification/MessagesTies to the phone, if you swipe away on the phone lock screen, it dismisses from the band.

Will appear on the band when it reconnects to the bluetooth range even if it came when your band is out of range.Have to manually remove from the band.

Fitbit finally added sleep score feature into their app on Wednesday, Sep 04, 2019. This feature was available for beta testing. Still not too sure of the usefulness of this feature but so far most of my sleep score is more than 80 (which is considered good).


When this feature was enabled, some of my historic sleep data were also scored but some were not. Not sure why, but the note claims that it is due to insufficient information such as:
Slept in a position that prevented consistent heart rate reading. Less than 3 hours sleepDevice battery was too weakMy device does not have SpO2 sensor. I don't think any of the above applies but I am not going to worry about it. It is just another number that is nice to know about myself.
Post a Comment
Read more 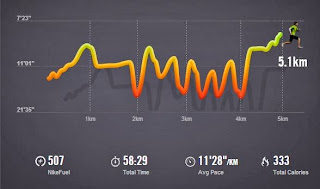 The last time I looked for sportsband was back in 2009 when I was training to be the fastest man (i.e. the fastest marathon runner). In order to use the sports band, you had to have a Nike+ sensor in your shoe. Nike shoes had cavities to insert the sensor but Nike shoes were not suitable for me. Unfortunately, I lost the chip sensor 2 weeks after I purchased the set. I continued to use the sports band as a watch but the quality of the LED was lacking. After a few accidental pressure of the display, the display was no longer usable - most of the display turned black.

Recently, I noticed my colleague using BitFit Flex. I decided to check the number of sports band (now known as fitness band) that are now available. The new generation of sportsband uses the sensors similar to the ones in smart phone. They do not need the additional chip sensor and are able to track activities beyond running. I looked at the alternatives and found the following: