Showing posts with the label petrol
Show all 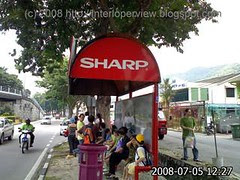 It's been a while since I took the bus in Penang. Several years back, there was a new bus company that was transferred from Kuala Lumpur to Penang called Rapid. This company was to improve the public transport in Penang.

It's been more than a year since Rapid Penang service started (July 2007). Since my children wanted to go to town and my car was temporary unavailable, I thought I would take the opportunity to see if the public transport in Penang has improved.

We left the house about 12:15 pm and approached the bus stop. When we reached the bus stop, there were about 11 persons there (two senior citizens, 3 children included). We spoke to them and they told me that they have been waiting there for more than 15 minutes but have not seen a single bus throughout that time - passing either side of the road. They were visitor from Medan in Indonesia.

This is the busiest road in Penang and yet not a single bus passed by the road for more than 20 minutes unbelievable. My children and …
Post a Comment
Read more

Getting Money back from your Petrol

By Strovek - March 15, 2008
When filling up petrol for your car in Malaysia, it is possible to get some money back.
The rate of return can be increased with the combination of credit card (see my previous post on getting money back from your credit card).

BHP Petrol (previously known as BP)
You can accumulate points either using BHPs own card or using Genting's World Card.
Swipe your Genting card after your credit card - some of the stations require you to go to the counter.
If you accumulate the points using Genting's Worldcard, it is equivalent to cash
Points will expire after 3 yrs.
100 points = RM 1/-
Unfortunately the points can only be redeemed in Genting Highland.
Return rate is 1%.
Additional Note: You can accumulate more points for other participating merchants.

Shell
Points can be obtained using Bonuslink.
Very important note that you are required to Swipe your Bonuslink card 1st before your credit card (different from all other stations). Failing which you will not accumulate any points.
Points accumula…
Post a Comment
Read more
More posts