Showing posts with the label Marvel
Show all 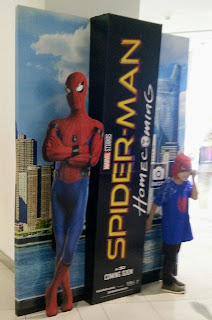 Spider-man: Homecoming is the latest reboot of Spider-man. I expected it to be great but the feedback from my family were as follows:
My son: “The story is too cliche”. My daughter: “It was Meh!” My wife: “The story does not get me emotionally involved!”
What I liked The introduction to Toomes was good, providing with his motivation; change to survive. However, I felt a bit irritated with the time spent on Peter making his video. I realize it is meant to show us his enthusiasm and excitement but I felt it a bit out of place.
His interaction with Karen (his suit) was hilarious. The potential for the suit is incredible; maybe even more capable than Ironman suit (even though they were both invented by Tony Stark).
Using Captain America videos to teach children good values was great.
The movie ties very nicely to other MCU movies explaining what happens alien technologies leftover after the Avenger battles. Which makes me wonder, does the same happen for the battle occurs in foreign countries
My …
Post a Comment
Read more 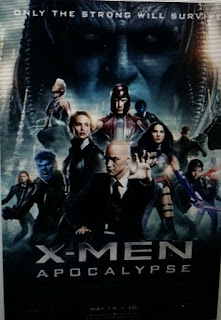 I used to like X-men comics, however, I found that the stories contain too much negative energy, hatred between men and mutants. I realize that there a lot of similarities in reality. Anyway, I still went to watch this movie.


The movie starts in ancient Egypt, where En Sabah Nur (aka Apocalypse) was revered as a god on the way to transferring to a new body. As the process started, a group of people tried to kill him by bringing down the pyramid and killing the new body before the process completed. They were partially successful in their attempt - he was protected by some of his powerful followers who died protecting him.
His revival in 1983 appears to be due to the action of Moira, who was following some worshippers of Apocalypse - she left the entrance open and allowed the sunlight into the cavern and activated the device used by En Sabah Nur and woke him up.
We are then introduced to Angel and Nightcrawler - forced to fight with each other in an underground fight club within an electr…
Post a Comment
Read more

By Strovek - May 01, 2016
The movie started in 1991 where Hydra being brought from a cryogenic chamber, his captors had a book that contains instructions on how to make him obedient to their command. He was then dispatched to steal a briefcase and leave no witnesses. This is later tied to the main storyline of the movie - similar to the Iron Man 3 where the something that happened in the past comes back to haunt us.
As for the what led to the civil war, the destructions and bystanders killed in the earlier movies - Avengers, Captain America 2, Avengers 2 placed pressure on the government to control the Avengers. However, Peggy Carter reminded Captain America that sometimes it is necessary to stand up for what is right even if everybody else disagrees.
The Sokovia Accord was proposed to place the Avengers under the jurisdiction of the United Nations. Tony Stark immediately supported the proposal because of of the guilt he felt after he was confronted by one of the mothers of victims in Sokovia. Steve on the othe…
Post a Comment
Read more
More posts